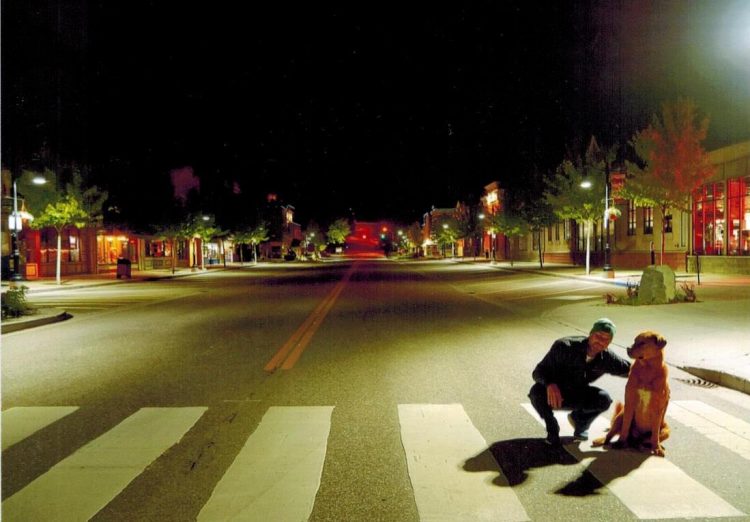 Posted by Neil Murphy Concepts on February 3, 2017 | Featured | No Comments 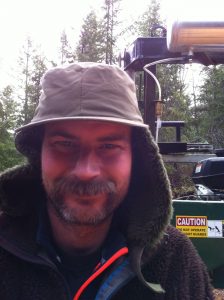 Meet the owner of the Rams Head Lodge – Martin Lundh, who
would be the first to admit the reality of the situation.
Hank is the boss.

Funnily enough, Martin was born in the same year that the
Rams Head opened – way back in 1975.

Before the 70s turned into the 80s, however, Martin was on
his first skis – on a local hill near his home in Halmstad – Oskarstromsbacken – in the south west of Sweden.

As his interest in skiing grew, he progressed to a bigger hill – a hill where one had to buy a ski pass no less, so he knew he was getting closer to the big time.

There was, sadly, not too much vertical but this ski hill had a ramp at the top for those seeking a bit more velocity on their skis. But you had to watch for passing cars on the road at the
foot of the hill – for there was no safety barrier back in those days.

Fearless & skeptical of turning, trained to ski on the streets of Sweden,  the street skiier that came to be known as The Bullet was born.

As the years turned on by, Martin was able to hone his street skills when he discovered the delights of the ski station of Sälen, further north in Sweden.

It wasn’t too long before Martin had to leave Sweden’s largest Alpine ski destination for some real Alps – the force of hunger for more was strong in this young firebrand of a Viking.

So, he & his family finally made their way to Saalbach in the Austrian Alps, where his passion for the ski lifestyle was nurtured & brought to full bloom.  Creamy reams of Nutella on all foods for breakfast & the incredible powder were enough to ignite a fire that still burns bright in this Swede.

Until one cold evening, back when the Swedish winter was at its darkest worst, and Martin was working at a meat-processing plant, he happened across a movie that changed his life.

Aspen looked spectacular to Martin & he vowed to make an escape from Sweden, before it was too late & he ended up as a lifer chopping & delivering joints of meat.  Wasting valuable daylight hours on a process of absolutely no interest to him.

Martin has always been what he describes as a “Plan A’ type of guy – he believes that the first idea that pops into his head is always the idea to follow. Instinct has served him well from day 1 – Aspen it was then.

So, he scraped a few thousand kronar together & jumped in at the deep end – flying across the world to a land where they spoke a different dialect to the Viking tongue he knew so well.

Except his raid on foreign soil was recreationally motivated – Martin wanted to have some fun. 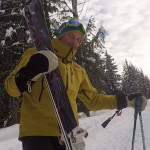 His forays into the realm of North American ski destinations took him to the vast terrains of Aspen & its 4 mountains, the lovely table-tops & jumps of Mt. Hood, Whitefish & finally into Canada through fabulous Nelson & Whitewater.

Keep an eye out for his tracks – they’re rarely spotted.  The straight lines of The Bullett.

Not even the Mantracker could find this guy…

Hank the Boss, on the other hand, is of these Kootenay Rocky Mountains – with a hell of a history of his own. 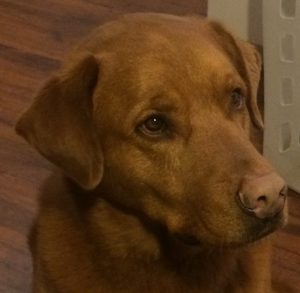 His mother Molly was a tenacious – but sometimes kind –       Bull Mastiff + Rothweiler mix.

Hank’s grandfather was a massive dog in his own right,
a bull mastiff of fantastic proportions, weighing in at
an amazing 215 pounds.  Holy crap.
That must be some kind of record – how do you even begin
feeding an animal of that size?

Hank’s dad came from a far more liberal background, in    which his grandmother was the most gregarious of hounds.     She loved to hang out with the other dogs.
This enabled Hanks’ dad to bring a taste of not just one but
4 more breeds to the table when he met Molly:-

All in all, Hank represents the power of these very incredible mountain dogs that went before him.

Hank is a very special animal himself, we never did doubt – but his gentle demeanor belies the very history that makes him what he is.

Which makes him the perfect host – kind & considerate & welcoming but possessing a very low tolerance for the very things that cause stress in our daily lives.

These are your hosts when you stay at the Rams Head – a pair that take great pride in welcoming you to their home – away from home – and showing you why your escape to BC will always be the right option.

Come see us & live the adventure.